Zines have entered a very sad period; the saddest in the history of zines. The zine world has been taken over by liberals who spout the same nonsense incessantly. There was a day when zines covered every walk of life and included incredibly diverse opinions. Alas, that day is gone.

But with Fishspit’s “Pussy Whipped Again” issue of his Wiseblood (started in 1984!), we finally get “notes from the underground.” This is something truly different.

This zine records Fishspit’s struggle to put a zine out that upsets the so called “modern liberal” with their incredible closed mindedness. Liberalism, by its nature, is supposed to be a system of values which is based in open-mindedness. But they’ve somehow warped liberalism into an actual intolerant fascism. It’s truly amazing!

It has delightful collage work that expresses just what it means to be pussy-whipped, and just what it means to not be. It has a sensationally funny story about Fishspit slapping a female cat on her ass and the unbelievably whacky consequences. It also has the truly entertaining story of a fellow taking a date to the zoo, and having a giraffe sneeze an amazing amount of snot in her face, and the farcical results of just such absurdity.

You won’t find anything like it in the countless zine drivel by the “Oh! We’re so oppressed” zesters. (To give an example I recently received a zine with an entire content arguing that white female feminists were not true feminists because of their privilege! Who wants to read that nonsense?!)

It is unbelievably refreshing to have a zine like this! I give a nod and a wink to Fishspit for his bravery to keep putting out zines that are going to be unpopular with the zine status quo. This sort of zine is the true “underground” in the modern zine scene. 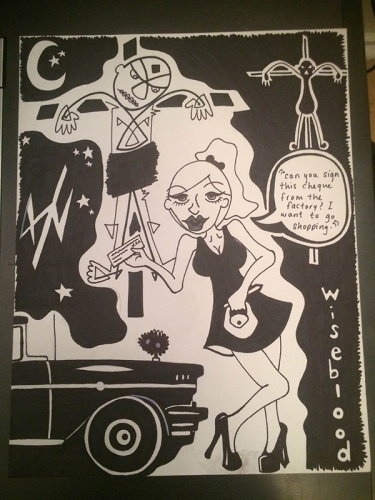 A Review of “Don’t Call Me Cupcake” #5 by Fishspit

Good golly Miss Molly! Cupcake has done it again! Giving us another fascinating glance into her bazaar persona in “Don’t Call Me Cupcake” #5! Let’s begin with her little ditty “The Night My Heart Broke.” Stories of a person’s dark night of the soul can often result in complete duds . . . boring us with their self-righteousness and self-importance . . . or . . . they can strike awe in our hearts with the unfathomableness of such an experience. From Byron to Beelzebub (as reported in Milton) I have searched out such stories all my life . . . and I’m here to report that Cupcake’s account is one of the finest I have read. From the destitution of her poor little soul, to her stand against her bedevilments (with resulting resilience) this story has got the suss! No candy-ass pussy-footing here! It’s an intense story . . . a tiny holocaust . . . much to be admired that it would be shared.

You will bounce like a ping pong ball through Cupcake’s extreme neuroticism (“the broccoli mountain” and “liar liar”) into her love of writing . . . into her being cheeky enough to let us know what her 30 year old self would tell her 20 year old self . . . then whappo (!) Back to more neuroticism. She’s funny, nihilistic, passionate, and completely cracked. I am not a reviewer . . . nor am I person who would associate with this sort of weirdo (it’s quite obvious that Cupcake is a bluestocking, and I’ve always found this kind of broad insufferable to be around) . . . so! So! When I say this zine is absolutely delightful (and a must read) you can trust me on this. I ain’t shy about telling when a zine is a snoozer

P.S. I hope that Cupcake will tell us in #6 why the 30 year old Nyx would tell the 20 year old Nyx to not introduce Wanderer (that’s her “bloke” as she calls him) to Facebook.

I review zines! I also show them off on YouTube. I also love zines and occasionally pet them. If you want to send zines (or other items) for review or adoring petting, send them to:

Want to talk trades, send letters in to Dear Anonymous, ask me about mail, or something else? You can email me at:

I am incredibly grateful for any support that helps me to keep reviewing zines, podcasting, and everything else I do to show my love for zines.

If you have anything to spare and like what I do here on SGZ, please consider throwing some coins into my hat through Ko-Fi: