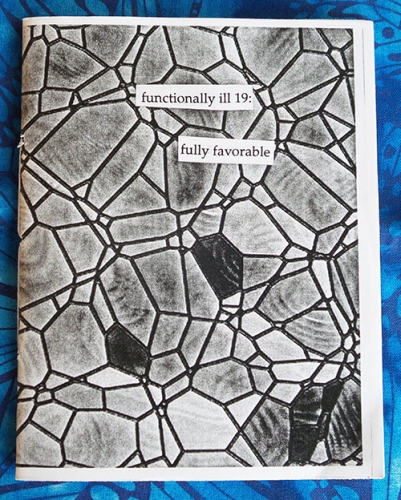 Functionally Ill: Fully Favorable is the 19th is a nine-years-running (at the time this zine was made – it’s not dated) zine about Laura-Marie’s journey from the first diagnosis of bipolar disorder. In this issue, Laura-Marie shares some snippets from letters she’s written as well as touches on Social Security hearings, leaving a therapist behind, new psychiatrists, and more.

Functionally Ill doesn’t go into a lot of background or history beyond the brief introduction. Usually I would find that distracting from the content right in front of me, but something about Laura-Marie’s writing put me right into the moment where I didn’t need more information. I want it – I want to read more zines in this series – but it wasn’t distracting.

Laura-Marie’s experiences with Dr R made me angry about heavy-handed psychiatrists, and, thought this zine, I got a glimpse into what it’s like to try to get Social Security payments in the US. I liked that excerpts of letters to others were in the mix, showing the subtle differences in writing voice but almost getting a different perspective on events.

What's On Your Mind? Cancel reply

This site uses Akismet to reduce spam. Learn how your comment data is processed.

I review zines! I also show them off on YouTube. I also love zines and occasionally pet them. If you want to send zines (or other items) for review or adoring petting, send them to:

Want to talk trades, send letters in to Dear Anonymous, ask me about mail, or something else? You can email me at:

I am incredibly grateful for any support that helps me to keep reviewing zines, podcasting, and everything else I do to show my love for zines.

If you have anything to spare and like what I do here on SGZ, please consider throwing some coins into my hat through Ko-Fi: